I’m a sucker for scenery. It’s true. As much as I love stories about human interaction and purpose, there’s something so refreshing about reading poetic lines that perfectly depict the alluring lost corners of this world and how people connect with them.

I also crave new storylines. Don’t get me wrong: I will never scoff at boy-meets-girl and happily-ever-after plots. But my mind desires something different too. Something that allows me to explore topics and places I never thought about before or personally experienced.

For these reasons, I’ve been intrigued by Kristin Hannah’s The Great Alone since it was published in early 2018. In short, it’s a story about a family that moves to Alaska to live off the land. Check out my library, and you won’t see many titles with similar summaries. I couldn’t wait to get lost in it on my trip to Africa (now that was a solid 10 flames); unfortunately, I didn’t willingly escape to another world. Instead, I couldn’t find my way out of a book that dragged on, had random and too many plot twists, and dramatized to the nth degree. 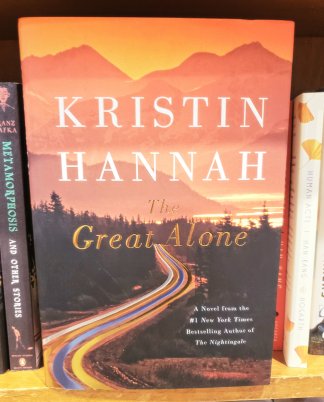 Ever since her father returned from Vietnam, 13-year-old Leni has had a tumultuous life. Her parents, Ernt and Cora, go from screaming matches to love-making sometimes within minutes — and in the open. They’ve moved around a lot, and she’s had trouble fitting in at the schools she briefly attends before her parents whisk her off to some place new. She tries to remember how peaceful and normal her life was before Vietnam, but those days seem long gone.

Which is why when her father, in 1974, decides to move the family to Alaska, the great scantily settled land far away, she and her mom put up only a weak fight. Maybe this is what he needs after all. Besides, there’s no stopping Ernt once he makes up his mind. While he seeks peace, quiet, and hard work to chase away the nightmares of his past, he doesn’t realize the difficulty the Allbrights are about to endure or how the darkness that envelopes Alaska will bring its own set of terrors and will manifest in himself. The charm that Alaska possesses during the summer, when they arrive, is easily forgotten once winter approaches.

Ernt’s fragile state not only directly harms Cora and Leni mentally, emotionally, and physically, but it also alienates the friendly self-reliant neighbors who try to help. Mother and daughter begin fending for themselves until they realize there’s only one way out — and that way will play protagonist for the rest of their lives. The Great Alone is about family, tragedy, coming of age, mental illness, and also of the wild land we try to claim and tame.

“All this time, Dad had taught Leni how dangerous the outside world was. The truth was that the biggest danger of all was in her own home.” — The Great Alone

If you think that’s a lot wrapped into 438 pages, you aren’t wrong. This was another one of those books that, on deeper reflection, I realized I wanted more — not more pages or plot. Think of the “less is more” variety. Hannah, who clearly has a creative mind to imagine this story, seemed to squeeze in anything and everything about these characters and this place, which made for a long read. While at first I was intrigued, I later felt like I was finishing this book simply because I had to. I’d made it so far and couldn’t just give up.

And that’s never a feeling you want with a book. I’m not opposed to longer reads, but I get frustrated when a long story doesn’t have that much to say or when the author keeps adding plot points. The Great Alone takes up the latter characteristic. This book has approximately three climaxes, and each time, the drama is hyped up to unrealistic and cliché proportions.

If you read my review of what’s probably Hannah’s most popular book, The Nightingale, you’ll remember I also remarked on the numerous storylines in that novel. Hannah fit them together more seamlessly in her World War II read than her Alaskan adventure though. I also wrote that The Nightingale was slightly cheesy and a little impossible. I have those same feelings about The Great Alone. Are these inherent characteristics in Hannah’s writing?

“[The Great Alone] is a heart-tugger written in borderline young adult style, combining terrible troubles with notes of overripe romance. As in: ‘When he touched her: music.'”

This negative, though, is nearly balanced by the beauty with which she describes Alaska.

Alaska usually isn’t a novelist’s first choice for a setting, which is one reason this premise excited me. That part of the book doesn’t fail me because, despite Hannah’s exaggerated tendencies, she describes Alaska just as I imagine: breathtaking and peaceful yet terrifying and unchartered. It’s the dichotomy of a writer’s dreams, and Hannah accurately portrays this dichotomy in her characters, especially Ernt. He wants to be a better person and does truly love his family, but sometimes he just cannot evade the darkness. Just like Alaska — or at least how I imagine it to be.

Maslin agrees with me on this point too, demonstrated in this line from her review: “The Great Alone is packed with rapturous descriptions of Alaskan scenery, which are the most reliably alluring part of it.”

Hannah has the ability to capture an audience, illustrated by her descriptive writing, but The Great Alone makes me question if she can really carry it home for them. It’s not enough to rely on a setting and its beauty that you can convey. Sucker or no sucker for scenery, I still need solid writing and one strong story — not two, three, or four, which is what I get with this novel.

“You know what they say about finding a man in Alaska — the odds are good, but the goods are odd.” — The Great Alone