I’m typically not a fan of unsolicited advice, so I never seek out self-help or inspirational books. That would be contradictory. Randy Pausch’s The Last Lecture, though, wasn’t inspiration or a guide to life. It was humor, heartache, and realism all tied up into many different life lessons, the first of which being: You should read The Last Lecture. 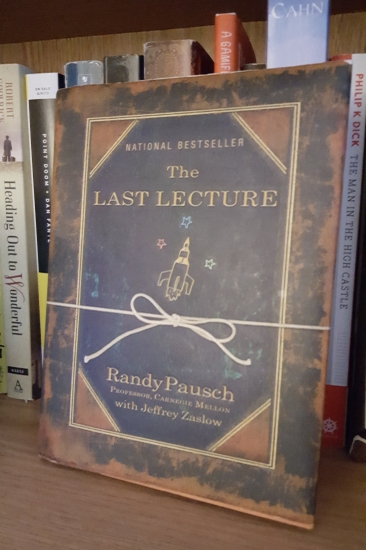 When I read The 7 Habits of Highly Effective People for a high school class, I wanted to barf. First, please spell out all numerals under 10. Second, I don’t buy in to the advice for achieving a successful and happy life. Everyone has their own strengths and weaknesses, their own luck, their own circumstances, and their own ways of defining success. I don’t need to read about one person’s opinion of how to get there. I vowed that I’d never read anything along those lines again (I realize how harsh this sounds).

I kept that promise until The Last Lecture. It seemed different because Randy Pausch firmly believed the best life isn’t one of money and glory; it’s one that pursues childhood dreams and enables others to do the same. The book isn’t a self-help guide for accomplishing a certain status. It’s about a dying man who is the epitome of living life to the fullest. His storytelling effectively altered how I want to live each day.

Randy Pausch was a computer science professor who was asked to give his last lecture, a tradition for instructors at Carnegie Mellon University about to retire. Randy wasn’t about to end his career though. After fighting pancreatic cancer for over a year, he was in the last few months of his life. When pondering the topic of his lecture, he could think of only one thing to bestow upon his audience: the importance of following your dreams.

The book recaps this lecture (which can be viewed online but only if you have tissues handy) with extra tidbits about his family that he knew he couldn’t discuss in front of an audience without becoming emotional. He started by explaining his very specific set of goals that he developed in his youth:

Randy told the stories of how he used enthusiasm and persistence to achieve all of these (well, maybe he didn’t play in the NFL or become the Captain Kirk, but he got close enough) and the lessons he learned from each. From there, he described the magic that you experience when you help others meet their goals as well and his tips on how to live this life best.

“Give yourself permission to dream. Fuel your kids’ dreams too. Once in a while, that might even mean letting them stay up past their bedtimes.” — The Last Lecture

One of the best things about Randy was that you could tell he was the type of man who never compromised his morals and showcased his own advice in every decision he made. He would give you one tip and then you’d see that come up in another situation 30 pages later.

For example, one tip he gave was to always make a bet, supplementing that with a funny story about him, his mom, and his habit of leaning back in her kitchen chairs. A few chapters later, when he talked about loyalty and fighting for others, he mentioned making a deal with a dean so one of his most talented students wouldn’t be expelled from one bad grade.

Maybe another reason I connected so much with Randy was that he reminded me of someone special in my life. He was incredibly intelligent, had an amazing sense of humor (cue dad jokes and puns), owned his quirkiness, made decisions with logic and efficiency in mind, and overflowed with positivity and fun while keeping a healthy sense of reality. He advised to always emulate Tigger rather Eeyore, and it was clear he took his own advice his entire life.

“Complaining does not work as a strategy. We all have finite time and energy. Any time we spend whining is unlikely to help us achieve our goals. And it won’t make us happier.” — The Last Lecture

At the end of the book, Randy wrote to his kids things he couldn’t in person because they were too young to understand. He gave this advice to his daughter:

“When it comes to men who are romantically interested in you, it’s really simple. Just ignore everything they say and only pay attention to what they do.”

And then he talked about his wife, Jae, and the awe and admiration he had for her. Although the content in these chapters wasn’t explicitly discussed during the live lecture, he shared the story in the book about having the entire audience sing happy birthday to Jae. I’m pretty sure there wasn’t a dry eye in that room.

By this point, I was a blubbering mess. That someone special referenced above was sitting near me on the couch, and I made sure to turn away from him so he wouldn’t see. How could one person who I had only heard of one month previously make such an impact on my life? The only answer could be that he was someone who left his legacy with every single person he met … and the millions of individuals who read or watched him virtually. That’s someone who lived his life the right way and from whom I’ll take any and all advice every day.

“We cannot change the cards we are dealt, just how we play the hand.” — The Last Lecture

3 thoughts on “So Live Your Life”